by Honor Kwasi Tsali
in Business
0

President Nana Akufo-Addo has relieved Colonel Kwadwo Damoah (Rtd) of his post as Commissioner of the Customs Division of the Ghana Revenue Authority (GRA).

A letter dated Friday, 26th August 2022 and addressed to Col Damoah by Nana Asante Bediatuo, Executive Secretary to the President, said: “Following the expiration of your contract of service as Commissioner (Customs Division) of the Ghana Revenue Authority from 13th of October 2021, the President of the Republic has directed that effective Friday, 26th August 2022, you hand over your duties and office to the Acting Deputy Commissioner (Preventive Service), Mr Seidu Iddrisu Iddisah, who will act as the Commissioner (Customs Division) pending the President’s substantive appointment”.

“The President thanks you for your service to the state and wishes you well in your future endeavours”, the letter added.

Col. Damoah has been in the news of late following an investigation by the Special Prosecutor into Customs Advance Ruling granted Labianca Group of companies owned by a Member of the Council of State.

The OSP revealed that the discounts granted the company were far below the benchmark values. The OSP has since retrieved over 1million Ghana cedis from the company.

According to the OSP, the company procured “that favour” from customs because of the influence of the owner. The office has since launched an investigation into possible corruption or corruption related offences at the Port either by way of advance rulings or auction sales of vehicles and goods.

The Commissioner of the Customs Division and one of his deputies are accused of deep involvement in some of the occurrences but they have come out to deny any wrongdoings. 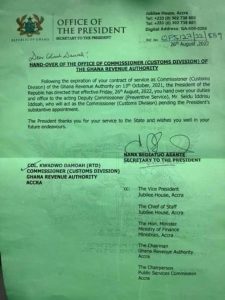 Honor Kwasi Tsali is a Senior Journalist/Writer at TheGhanaianVoice.Com He holds a BA degree in English from the University of Ghana, Legon. He has more than 10 years of experience as a Journalist focused on news reporting, editing, and production.

Minority Reshuffle: Election 2024 Will Be On Economy And We Put Our Best Foot Forward – Asiedu Nketiah

No Result
View All Result